A few weeks ago I met up with my brother Domingo in New York for 24 hours (which ended up being 48, although that’s another story on its own). We had a fantastic time together, walking from Broadway to the Battery and taking in everything the city has to offer – including dinner at The Modern. Mmmmm… When I came back to Toronto I was full of NY inspiration, which slowly dissipated unfortunately… until TODAY.

I did not draw buildings, I drew people. The first dozen sketches were so hopeless I almost gave up; 9-year-old Araceli would’ve done a far better job. But suddenly they started turning out a bit better and after drawing another dozen New Yorkers from the 60s I’m actually quite proud of the following 4 who made it to this post. 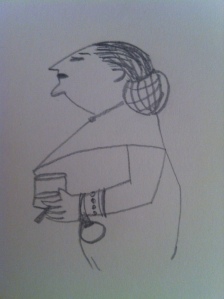