Good weather makes weekends seem just like paradise. I had some friends over for dinner on Saturday night. The menu consisted of Jamie Oliver’s delicious baked mushrooms stuffed with ricotta (I used basil leaves instead of oregano, so good), with some rucola with a lemon dressing and Northern Spain paella (plenty of meat and no seafood). From a neighbourhood perspective, I was stuck in Parkdale: 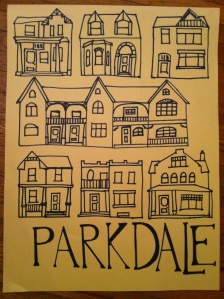 Yesterday was glorious, and in order to make the most of the weather, my friends went to the Islands to spend the day: 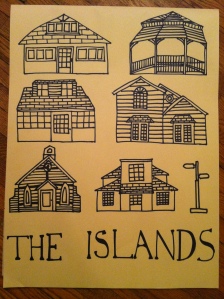 I pottered around, watched Nadal beat Federer, and after having brunch at the waterfront, I spent part of the afternoon at Trinity Bellwoods. It’s a lovely park on Queen West: 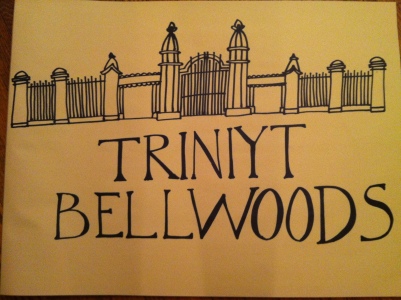 These are the new sketches of Toronto neighbourhoods that I’ve been working on. Obviously still sketches – I mean, TRINIYT?! I was obviously VERY distracted when I was working on my lettering…! I still have to work on the composition, select which buildings/houses are more representative of each neighbourhood and obviously, TRY to make it as centered and straight as possible – particularly the lettering. But it’s a project I’m really enjoying as it makes me get on my bike, explore some wonderful areas of this city and then, once at home,  draw them out rather quickly with my big fat marker pen on the biggest sketch pad known to man. 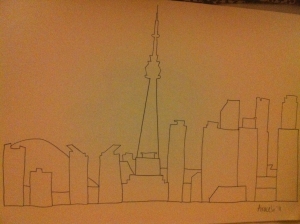 One of Toronto’s gems is, without a doubt, the Islands. A mere 10 minute ferry ride from downtown, the Islands are located on lake Ontario and sit happily directly across the city. Cars seem out of place in such a paradise and naturally, there are only a handful of them throughout the Islands. This makes cycling the preferred way of transport and as I love my bike it makes the place EVEN more appealing if possible. 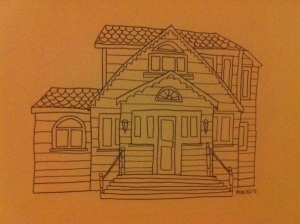 So a couple of days ago I got on my bike – her name is Janet by the way – packed up a picnic, sketchbook and pens, and book and headed towards the Islands for a full day of sunshine and fresh air. There’s nothing like stretching under the sun with a sweet breeze, listening to the waves and reading a book. I thought I’d be unable to move from there until dusk but a spider the size of my thumb (huge by my standards) started pestering me and no matter how many times I flicked her away, she’d come back. So I got up, packed my stuff and cycled towards Ward’s Island. An entire creative community lives there, and their houses are gorgeous. I did a few sketches  and turned around and did a quick drawing of the Toronto skyline. By the time my stomach was telling me it was time to head home, one of the locals was kind to point out I had just about enough time to cycle and get on the next ferry. Perfect timing. Perfect place. Perfect day! 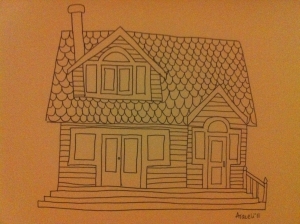