When I finished my BA, I moved to Madrid. It had it all for me: an elegant international city whilst still being very Spanish. I thought I’d live there forever… little did I know that less than two years later I’d be moving to London. To live there forever… and, well, I am in Canada, living in Toronto and about to move to yet another city. 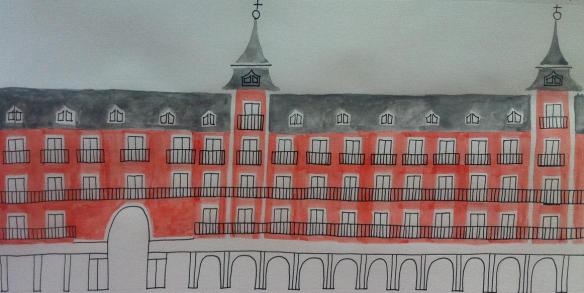 But I digress… Madrid was SO MUCH FUN. Particularly the first year, where I wasn’t senior enough at my company to worry about work after hours. Where if I arrived home before 7am after a night of partying, I thought the night had been a waste of time. Where it was incredibly easy to make friends. Where my beautiful sister Reyes lives and whom I met up with regularly. She basically fed me via tupperwares full of love and food throughout my second year in Madrid, when I was busy doing my MA and broke because I had to pay for it. There were very few things I could actually afford, BUT I could still treat myself to a “bocadillo de calamares” from time to time. Above is a watercolour of the Plaza Mayor de Madrid, where the best “bocadillo” can be found. Mmmmmm I would certainly kill for one of these right now.

NOTE: The photo above was taken from here.