As a teenager I used to watch the Oscars every year. I LOVED the show, filled in the printable ballot from the official website with my fellow geeky friends and entered various competitions. I was an Oscar freak. I mean, I must’ve loved it in spite of the fact that it started at 3am (Spanish time difference), on a Sunday (?!), I always had an exam the following day, the Spanish journalists on the red carpet made the worst questions and attracted the least interesting celebrities and THE ENTIRE SHOW WAS DUBBED IN SPANISH! ARGHHHH. Even though I never even came close to guessing who the winners were, I always supported the decision made by the Academy. BUT this year, I seriously think something has gone awfully wrong: Terrence Malick’s The Tree of Life is nominated for Best Picture and two other awards. WTF? 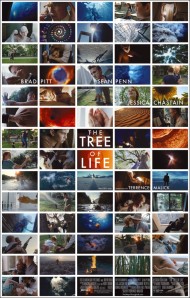 I have left the cinema halfway through a film only on two occasions: some obscure western in the 1990s and The Tree of Life. And we’d only watched it for about 30 minutes. The feeling of guilt for convincing my two friends to watch Terrence Malick’s film was just unbearable and I found myself either saying “sorry” to them every 5 seconds or just laughing at the screen – it’s not a film, it’s someone’s brain mush after taking industrial quantities of LSD.  I mean, can anyone endure 30 minutes of THIS:

We couldn’t… and found ourselves doing our own version in the bar next door to the cinema. It’s even shorter than the clip above and it doesn’t make you want to kill yourself after watching it:

I have done some research into the matter and was literally gobsmacked when I saw that The Tree of Life has also a great score on IMDB. I don’t get it. Part of me wants to rant about the film as Mark Twain did on Fenimore Cooper’s The Deer Slayer, but that would require me to watch the ENTIRE film and I have a feeling that if I did, I’d want to shoot myself after plucking each of my eyelashes slowly…

NOTE: The poster for The Tree of Life is via Film Book

2 thoughts on “The Tree of Life nominated for Best Picture… why?”